by Sons of Huns 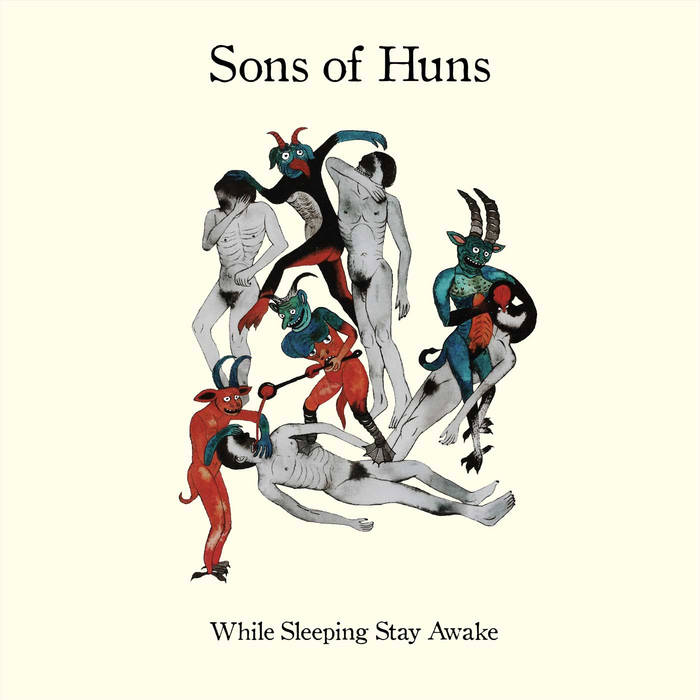 Michael The latest addition to my music collection may very well be some of the best riffs I've ever heard. This album is completely filled with some of the finest guitar sounds and shredding that exist in my deep music collection. Vocals completely compliment this bands sound, and the bass and drums are solid and built like a brick house. The chemistry here provides musical wickedness! Favorite track: Osiris Slain.

Colin M. Toes the line between a variety of genres, but all you really need to know is that it absolutely shreds, with great leads, basslines, some wicked drum fills, and vocals that perfectly compliment the garage/stoner/desert rock/punky vibe. Check it out! Favorite track: An Evil Unseen.

The quest for truth can lead to many different places. One door shuts, another door opens. One path dead ends, while another path widens. Life can often be akin to that proverbial rabbit hole, spiraling through options only to be left asking, “Why?” Sons of Huns explore some of the universe’s biggest questions on their second full-length album for RidingEasy Records, While Sleeping Stay Awake. This journey commenced for singer and guitarist Pete Hughes under the most unpleasant of circumstances—to say the least.

“I got bit by a damned bacteria-ridden tick in the Virginia woods when I was a teen,” he sighs. “I got Lyme Disease, among other things, leaving me now 16 years later with chronic pain and illness and searching for answers to questions that no one seems to have answers for. That’s at the heart of While Sleeping Stay Awake. Its themes include Raja Yoga, meditation, Egyptian magic, occult and Hermetic philosophy, our connection with the stars and cycles of life, death, and rebirth.”

The Portland trio rounded out by Ryan Northrop [drums] and Aaron Powell [bass, vocals] retreated to Sound of Sirens Studio in Los Angeles with producer Toshi Kasai [The Melvins] for a week in January 2015. During that time, the group honed its robust rock sound with the right flourishes of spacey elegance and artful bombast.

“We’re a heavy rock band, no frills, we turn up and let it rip,” he adds. “Playing this music is cathartic, and we hope this album captured that.”

Puffing out smoke of Sabbath-ian proportions, the first single “An Evil Unseen” pairs an incendiary six-string call-and-response with a duet between Pete and none other than Wino of St. Vitus. “’An Evil Unseen’ is a she-demon succubus that drains you dry, but leaves you desperate for more,” explains the singer. “It’s a great introduction. We were also extremely privileged to have Wino come in after a gig and nail it.”

Meanwhile, “Philosopher’s Stone” rolls up a bluesy groove into a whiskey-soaked rocker that quickly veers left into cosmic pensiveness in between booming drums from Dale Crover of The Melvins. “That one is about a Hermetic philosophy and using inner reflection and meditation to illuminate the darkness and understand your true will,” he adds.

The finale “The Reaper is Waiting” allows the axe to fall in one final distorted hum. Pete says, “If you are aware of no more than your physical body and live fearing pain and death and believe the reaper will come for you, then you’ve fallen into the trap. It’s an alert to realize there is something more.”

In 2013, Banishment Ritual announced the arrival of Sons of Huns. They shared the stage with everybody from Kadavar and Pentagram to the mighty St. Vitus, while earning acclaim from tastemakers like CVLT Nation, The Sludgelord, and Decibel Magazine who described them as, “Rampaging garage rock with plenty of stoner/psychedelic inclinations.”

As the questions continue to loom, Sons of Huns leave listeners with a few options of their own on While Sleeping Stay Awake. “If you just want to bang your head, then hell yeah, I hope the album does that,” concludes Pete. “At the same time, for those on a path of self-discovery, I hope it opens doors of inquiry.”

Throughout their reign in the Pacific Northwest music scene, Sons of Huns have become widely known for their ability to turn every live show into a sci-fi, psychedelic-rock party and livening the spirit of every crowd with their jokes and unforgiving volume. ... more